Campus Criterium Coverage
Posted by JimmerC at 7:12 AM No comments: 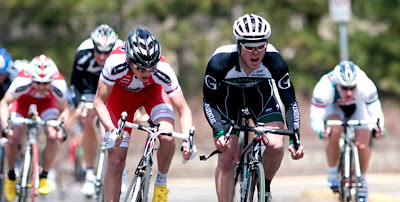 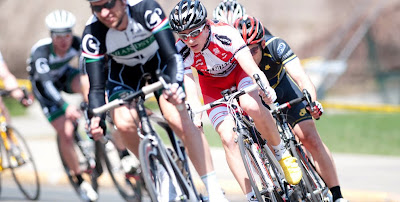 Jordan stayed near the front for the entire Campus Crit 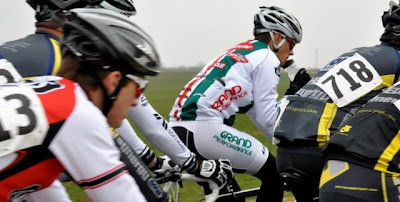 Jordan at Ken Woods
All photos courtesy of Anthony Kwan at the Minneapolis Musette
We went hunting for bike race glory, instead of Easter Eggs this weekend. Jordan found his, winning the Cat 1/2/3 Campus Criterium at the University of Minnesota. It was a Flanders versus Grandstay battle, with Jordan out-sprinting Grandstay's Brandon Krawczyk.

Saturday was the Ken Woods Road Race, where Jordan made the winning break. Unfortunately, he wasn't able to spin his 52x14 junior gearing the 43mph needed to stay with the break in the tailwind section. He regrouped with the chase, and finished a respectable 11th. He also survived a near crash when Gregg Brandt went down in a violent echelon twitch.

He was hungry for redemption Sunday at the Campus Crit. Being Easter, turnout was a bit light, with Synergy and GP noticeably absent. About 30 riders towed the line, with Grandstay and Flanders each having 4 riders. Grandstay's Dan Casper was definitely most aggressive rider of the day, getting away in solo and duo moves numerous times. Each time, Flanders, with help from a few others, chased Casper down.

Casper still found the strength to keep the field stretched out in the final laps, with teammate Ian Stanford taking over in the last couple laps. Jordan maintained excellent position near the front, and led the field into the final U-turn before the finish.

Hot on Jordan's wheel were Krawczyk, followed by Flanders teammate Mike Woell. Krawczyk clipped a pedal in the u-turn, and had to dig to get back to Jordan's wheel. Jordan surged through the curve to the finish line just enough to hold off Brandon, with Woell finishing 3rd. Both Carla and I were there to witness the amazing finish. We were definitely beaming with pride!

Prior to the start of this road season, Jordan had expressed his desire to upgrade to Cat 2, and I was against it. I didn't think he was ready. I'm definitely eating crow. I very proud of you Jordan!
Posted by JimmerC at 7:12 AM No comments: 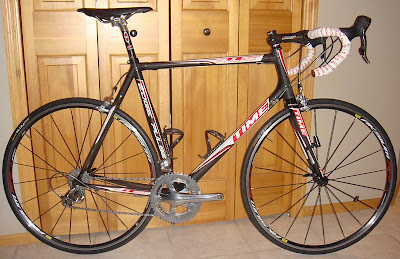 I am selling my Complete 2009 Time Edge Road Bike with Dura Ace 7800 Group, Bontrager cockpit, and Mavic Askium Wheelset. The bike is in excellent condition, and perfect working order. Never been crashed, used for 1 season. No pedals included. Bike comes as pictured above.

A great new site for local cycling coverage! Minneapolis Musette
Posted by JimmerC at 6:54 AM 1 comment: 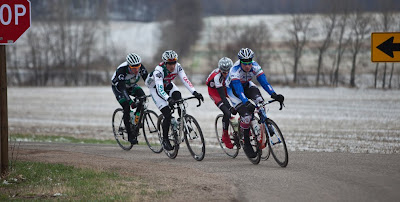 Jordan in an early 4-man breakaway with Dylan Knutson, Jens Brabbit, and an IScorp rider
Photo courtesey of Anthony Kwan @ Minneapolis Musette
Waking up to 2-3 inches of wet snow on the ground, strong winds, and 30deg temps was sure to be a death blow to turnout at the 2011 season opener Durand Road Race. The only thing that would keep Jordan and I from racing was the race being cancelled, so we made the annual trek. I was impressed with how many showed up! Even better, the roads were completely dry.
Jordan lined up with the Cat 1/2/3's with MBRC/Flanders teammates Adam Gorski, Mike Woell, Nick Kimpton, and Mark Skarpohl. Their field was plenty strong, with a full complement of IS Corp, GrandStay, Synergy, and GP riders. Jordan and his team rode a great race, but IS Corp took complete control of the race, putting all 5 of their riders in the winning break. Timmer was the only one to survive their onslaught, taking 4th place. Jordan drew out a group of 6 chasers on the penultimate lap, but the break was long gone. He rode valiantly, and finished 10th. Well earned!
I raced Masters 40+, whose field was most affected by the weather. So much, they combined us with the 50+. There were maybe 15 starters, and the racing was pretty civilized for the first 2 of 4 laps. We still managed to drop about half the group, including arguably the strongest rider in the race, Mike Johnson, who had a mechanical.
I attacked a few times during the 3rd lap, but every time, Birchwood strongman Mike Stensrud brought me back. After the climbs, we were down to 7 riders. I attacked again, and brought Mark Mlinar, Kent McDaniel, and Greg Tischler with. This left Stensrud chasing with Frank Lowry, and my new teammate Dave Herbert in tow. We had a gap, but it wasn't growing.
In the tailwind leg, as they drew down on us, I gunned it again, taking only Mlinar with me. We worked well together over the rollers, and slowly grew our gap. We kept working all the way to the corner before the finish. Mark being a good sprinter, I needed to get my timing right to beat him. I jumped at about 200m and held on for the win. Mlinar was gracious after the finish, as always. Well done Mark!
A few moments later, teammate Dave Herbert was able to out sprint Frank Lowry to win the 50+. Congrats Dave!
Results
I definitely owe my race win to teammates Bill Morice and Dave Herbert, who did a great job of keeping me out of the wind. Thanks guys!
Posted by JimmerC at 6:05 PM 1 comment:

MBRC held training camp this past weekend in the beautiful bluffs of the Root River Valley. The weather was perfect, and a great time was had by all. We're ready for the MN racing season to start! 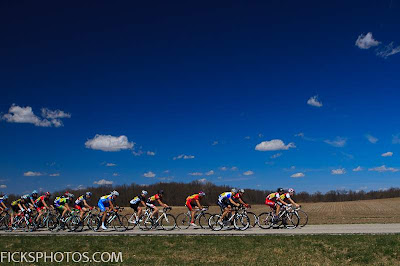 Nick Kimpton pulling the Cat 3 field, and sheltering Jordan, into the finishing circuit. 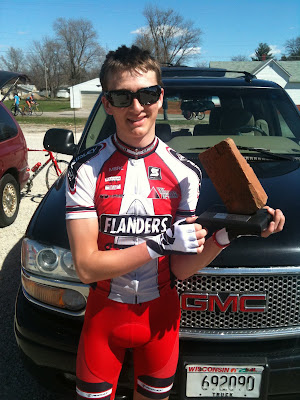 2nd Place - Cat 3 - Awesome Trophy!
We heard Hillsboro Roubaix was an awesome event, and it did not dissapoint. 65 degrees and sunny, moderate wind, on narrow, rolling, and winding country roads. Rough roads, but no gravel. The finish circuit has brick pavers, ala Snake Alley style, hence the name Roubaix. On top of a great course, the organization of the race was impressive. Corner marshals everywhere, awesome trophies & payouts. A true community event!

Jordan finished 2nd out of over 100 starters in the Cat 3 race. Teammate Nick Kimpton was instrumental in Jordan's success, with a massive pull into the finishing circuit to setup Jordan. 25-30 riders made it to the final circuit, with 14 sprinting it out for the win. Jordan had the victory in his sights, but was just beaten to the line by 29 year old Mark French. Awesome, considering Jordan's junior gear restriction.

Jordan has now officially upgraded to Cat 2 on the road. Congrats!
Posted by JimmerC at 11:22 AM No comments: 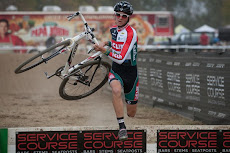 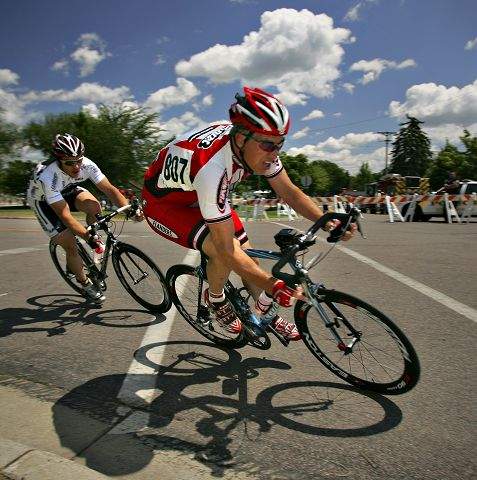 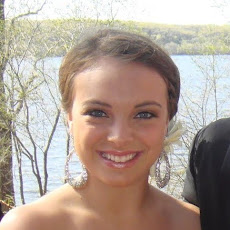